This year’s powderpuff game was an exciting one for all. 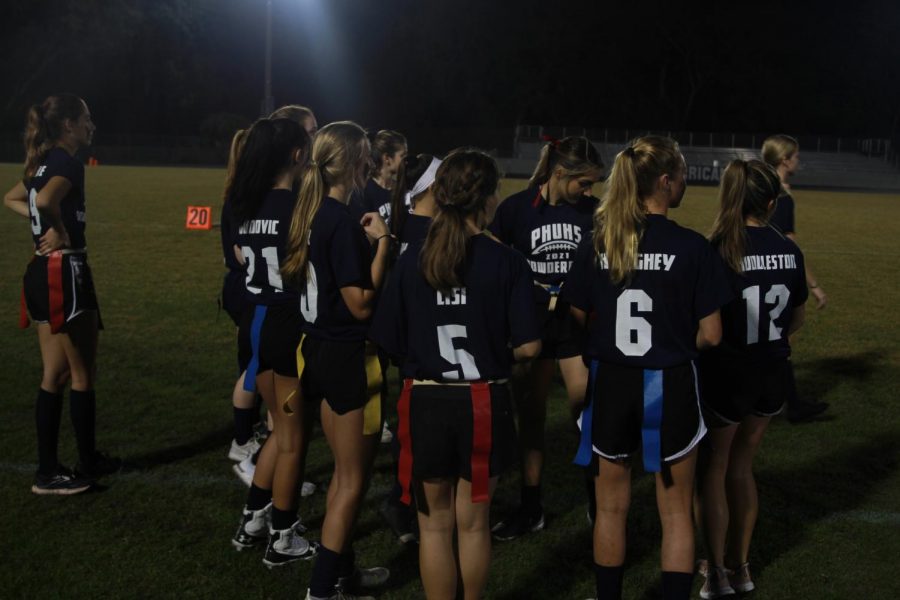 The seniors make a circle to get excited for the game, ready to win it!

Allyson May, Editor in Chief

As the fog submerged from the ground Tuesday evening of the powderpuff game, each grade level played against each other to see who would win this year’s homecoming flag football game.

The first game started with the freshmen against the seniors. In the first half, the freshmen had the lead. But soon enough, the seniors took the victory by scoring towards the end of their quarter.

“I decided to play because some friends convinced me to do it and I also thought it could be something new to try since it is senior year,” Kaitlyn Walker (‘22) said.

In between these games, students were able to come on to the track and play games sponsored by different clubs. Moreover, the male cheerleaders brought spirit into the crowd by cheering and playing tug-of-war.

“I love playing flag football with my friends and I think it’s an exciting way to lead up to homecoming,” Karissa Utegaard (‘22) said.

As it rolled towards the championships, the seniors and sophomores went face-to-face for the final win.

The game was tough for both teams, and as the time hit zero, the two teams were tied. The game had to go into overtime where the seniors took the final score, making it a win.

“It felt good to win the championship against my little brother (rival coach) of the sophomores,” football coach Jordan Givens (‘22) said.

“The best part of the game was seeing all the plays come together and how well we worked off each other and definitely winning at the end when we all got to storm onto the field to celebrate,” Walker said.

As all of the other grade levels played their hardest during the games, the seniors were able to take their own little trophies home for remembrance. Moreover, all students were able to look forward to homecoming on that Friday, December 10th.