Jonathan Larson navigates the ups and downs of being a struggling artist. 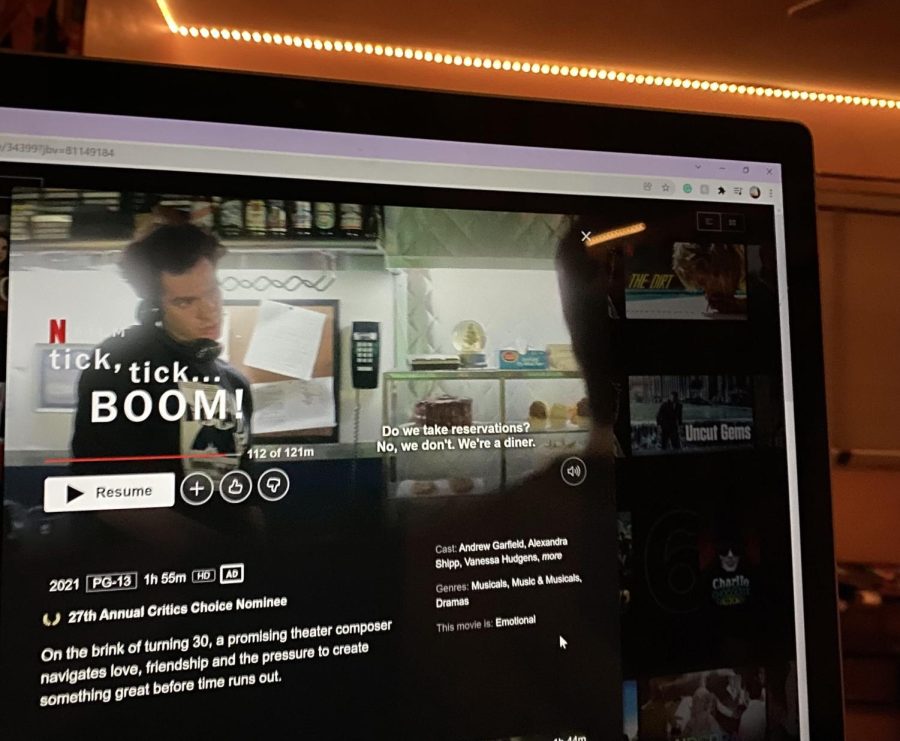 The movie ‘Tick, Tick… Boom!’ was released on Netflix November 12th, 2021. Directed by Lin-Manuel Miranda, this movie is based on an autobiographical musical by Jonathan Larson, the famous playwright and creator of ‘Rent’ the musical. The story follows Larson’s life as an aspiring playwright struggling in New York.

The basis of the movie is Larson attempting to get his musical “Superbia”, which he’s been working on for years, off the ground. He attempts to get noticed for this musical so he can get it on Broadway. He does this all while struggling with his relationship, money, and friends.

“I loved the movie. The cinematography flowed so well and the songs made sense. Its storytelling was excellent and didn’t find itself getting scrambled with all the changes from song to recounting to actually happening if that makes sense,” said Aly Vargas-Garzon (‘23).

Starring Andrew Garfield as Larson was the perfect fit for this role. Garfield executed Larson’s energy perfectly, not to mention his amazing voice that was featured in the multiple musical numbers of ‘Tick, Tick… Boom!’. Although criticized by many for not having as much musical experience as others, Garfield pulled it off and did it well.

Similarly, Vanessa Hudgens was cast as Karessa, an actor in “Superbia”. Hudgens and Garfield’s voices blended beautifully together in their duet “Therapy”. Both made an amazingly talented duet partner and co-star duo.

The best song on the soundtrack, although all of them were incredible, has to be 30/90. Sung by Garfield, this song is about being afraid to grow older and just enjoying life as it is before it passes too quickly. The basis being that Larson is turning 30 soon and, as the song states “They’re singing, “Happy Birthday” / You just want to lay down and cry”

Coming in a close second, Boho Days captures the essence of the entire movie. Jonathan Larson chose this life of pursuing his musical although it gives him financial insecurity. What matters most is that he’s pursuing his dream, as the song states “This is the life.”

“I can’t say there was any song I disliked. They are all super strong in their own ways,” said Vargas-Garzon.

Some reviews state that Miranda could have done more with the realness of the story. As the creator of Hamilton, big things are expected when he is a part of a project. Being kid-friendly has its positives but on the contrary, also has its negatives. “Tick, Tick… Boom!” includes mentions of HIV/AIDS and while it’s an extremely real and sensitive topic to be touched on it wasn’t played out to its full capacity. The movie simply didn’t capture the realness and sensitivity of the topic.

Additionally the story is difficult to follow at some parts and some scenes just seem altogether unnecessary. For example, the advertising focus group Larson was a part of added nothing to the storyline or overall goal of the movie. Instead of reaching its full potential as an engaging movie throughout it unfortunately lacks in multiple parts.

Overall, I recommend anyone who’s enjoyed ‘Rent’ or is a fan of Jonathan Larson, Lin Manuel Miranda, and Andrew Garfield to watch this movie. It may not be a complete masterpiece but it’s enjoyable and professional. Everyone who worked on this movie did an amazing job and even with its flaws, it exceeded my expectations.

“I thought it was really well done and it made me super emotional at some points, which is really rare for most movies I watch,” said Sullivan.